Bright lights and crazy colours: the Chinese cruise liner WORLD DREAM was a spectacular sight as she passed through the narrows of the River Ems in NW Germany en route from the Meyer Shipyard in Papenburg to Eemshaven. On 17 September thousands of sightseers followed the cruise liner’s passage along the Ems and were delighted when, with nighttime falling, the whole superstructure and dashingly decorated hull were bathed in the bright colours of 40,000 LEDs. 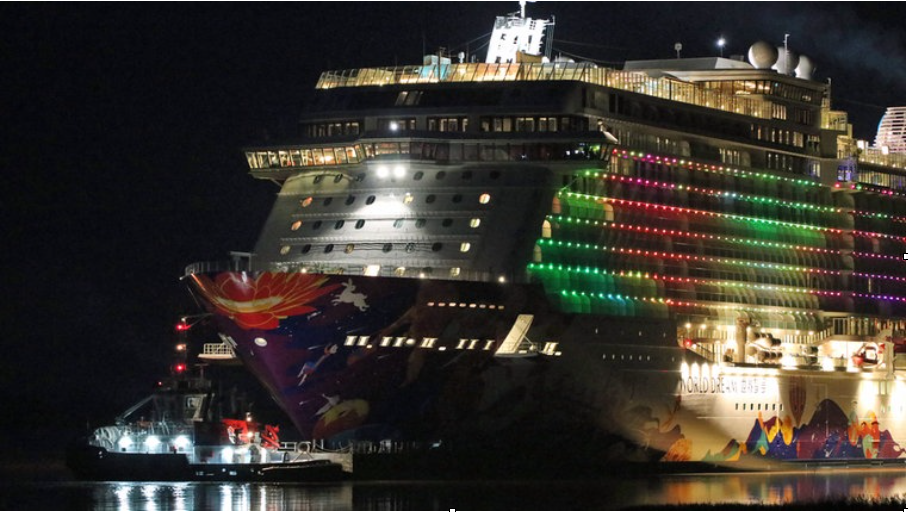 After arriving safely in Eemshaven on 18 September, the WORLD DREAM departed for sea trials in the North Sea on September 21. This giant liner – 335 metres long, 39.7 metres wide and with a draught of 8.10 metres – will serve the rapidly expanding Chinese market on cruise holidays from China to destinations such as Vietnam and the Philippines. It is the second luxury liner Meyer has built for Dream Cruises, which is part of the Genting Group. The WORLD DREAM’s almost identical sister ship, GENTING DREAM, was handed over to Dream Cruises in September 2016.

Around 1,200 specialists are accompanying the WORLD DREAM on her sea trials to complete work on the ship’s interior fittings and furnishings, e.g. laying carpets, touching up the painting and installing the high-tech audio-visual and media equipment. “The shows passengers will enjoy on the WORLD DREAM are even more spectacular than her highly colourful exterior,” says Christoph Schnetker, a media engineer responsible for coordinating the complex interplay of audio, video, IT and lighting technology on cruise ships like the WORLD DREAM. During the current sea trials Christoph and his colleagues are working long hours to ensure this cruise liner makes dreams come true after being handed over to Dream Cruises in late October.