It wasn’t long ago that the maritime industry was a man’s world. It was part of the culture in book, movies, songs an legends. The sea captains, sailors, explorers, naval heroes, even the pirates were all men. It was ingrained in the language: seaman, helmsman, fisherman, longshoreman, yachtsman.

The World has changed in recent years. Now there are female admirals, ship captains, ferry skippers, deckhands, marine engineers, maritime executives. At the end of the last year, Maria Secchitano of San Francisco defeated two men to be elected national president of the Inlandboatmen’s Union of the Pacific, which represents ferry and tugboat workers. She is the first female head of a seagoing labor organization.

It’s a sea change, so to speak. The future of women in the maritime industry is with the young people starting out in sea careers. One of them is Bonnie Much-nick, a 24-year-old Oakland woman in her first year as a seagoing officer. She is third mate on a tanker, carrying cargoes of gasoline an diesel fuel on the Mississippi River, across the Gulf of Mexico to Florida ports.

Muchnik represents new blood in an old-line company. She sails aboard the Legacy, a combination tug and barge that is 748 feet long, has an engine that develops over 16,000 horsepower and can carry 327,000 barrels gasoline and diesel. When she is on the bridge, she runs a ship and cargo worth millions of dollars.

Which is where Much-nick comes in. Growing up in Oakland, the bay and the Oakland estuary always in the background, she learned to sail and fondly remembers her first solo voyage. “When I was really young, I sailed an El Toro – a small sailboat – all the way across Lake Merritt all by myself,” she said.

The maritime academy is part of the state university system and is selective. “I didn’t get in the first time I applied,” she said. But she persisted, was admitted and earned a Crowley Maritime scholarship.

It’s a four-year-course, everything from maritime transportation studies, seamanship, leadership, modern electronics, even old-school celestial navigation. She was the cadet watch officer aboard the training ship Golden Bear in Long Beach in her senior year. When it was time to sail, she took the ship out to sea. Everyone was watching: the captain, the pilot, the older cadets. She was running the ship. No one ever forgets something like that.

She graduated last spring with a bachelor’s degree, and a third mate’s license in the United States Merchant Marine. Crowley offered her a job, and she went to work that summer.

Muchnick reported aboard the Legacy as the most junior officer. There are 14 mariners in the crew. She is the only woman. Sexism and all kinds of bad behavior are in the news these days. Has she had any trouble?

Muchnik works the 8-to-12 watch, taking over on the navigating bridge at 8 in the morning and again at eight at night. She has other duties as well, including working with the cargo of gasoline and diesel. It’s a 12-hour da, usually, 45 days on and 45 days off, and she is paid $94,000 a year.

A typical voyage on the Legacy starts at the refinery at Garryville, La., heads down to the Mississippi, for 145 miles, past New Orleans and into the Gulf of Mexico then east to Tampa, Fla., to deliver the cargo. A river pilot does the navigations on the Mississippi, and a harbor pilot in Florida. The captain is always around, but much of the time, she is on her own.

“Every single day, I learn something new,” Muchnik said. “And every day is different, I like it, I really do.”

Most of the time, the trip is routime. But in September they ran intro Hurricane Irma on the gulf. “We had 20-foot seas for three days,” she said. “We did a lot of rocking and rolling. I had the watch. It was interesting, to say the least.”

Like any 24-year-old at the beginning of a career, Muchnick has goals.  She’d like to work in tugs, for one thing, and work her way up to be a captain, and then maybe a ship pilot, a job that takes long experience and a lot of skill. 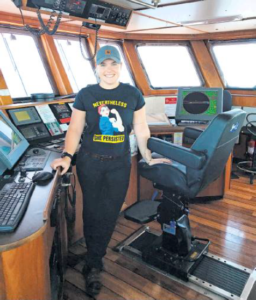