The naming ceremony for the latest TUI Cruises vessel, MEIN SCHIFF 1, took place during Hamburg’s annual port anniversary festivities on May 11. Built at the Meyer Turku Shipyard in Finland, the latest addition to the TUI Cruises fleet is 316 metres long, 20 metres longer and with one deck higher than the four previous TUI cruise ships, and can accommodate up to 2,894 passengers. Pollutants from the ship’s emissions are being reduced by a hybrid scrubber and catalytic converters. With particulate emissions an increasingly controversial subject in the shipping industry, TUI Cruises has been criticised for its decision not to commission an LNG-powered cruise liner. 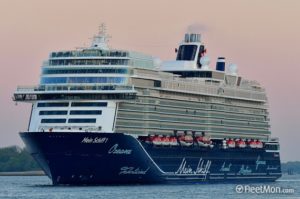 In the course of this year, Aida Cruises will be operating its first LNG-powered cruise ship and other cruise operators have already ordered LNG vessels. So why has TUI Cruises chosen to stay with ship’s diesel, which is more harmful to the environment than liquefied natural gas (LNG)? In a recent interview Lucienne Damm, TUI Cruises’ Environmental Manager, gave two reasons: first, the shipping line sees its current waste-gas purification system as technically outstanding; and second, operating one LNG-powered vessel in a fleet of six other newbuildings makes no sense from an operational and logistics point of view. Obtaining LNG tanking permits from every port of call and setting up the necessary LNG infrastructure (e.g. supplier contracts) is not an economically feasible solution for just one vessel. Lucienne Damm pointed out that the new ship’s desulphurisation system lowers particle emissions by up to 60% and also significantly reduces microparticle emissions.

Environmental organisations such as Germany’s Nabu (where, incidentally, Lucienne used to work), have frequently called for the installation of soot particle filters on cruise ships. Lucienne’s answer to that demand is that not even a prototype for cruise liners has yet been developed, even though TUI Cruises has repeatedly requested shipyards and equipment manufacturers to undertake such research and development.

In other words, little progress seems to being made in the critical issue of particulate emissions from cruise liners, the ships that dock closer to centres of population than most other types of vessels. As long as LNG tanking facilities are not universally available in the most frequent ports of call for cruise liners, this particular form of propulsion seems unlikely to achieve a critical mass in cruise shipping.