FleetMon’s fellow member Rob was on a 2.000 miles trip to transfer the sailing vessel Marathon from Barcelona to Falmouth. He already shared some photos and information with FleetMon, and now, nearly arriving the destination of his journey has provided us with his personal experience report:

“When I was asked if I would like to join the delivery crew on Marathon I considered it to be a trip of a lifetime. It has certainly been that and also fun, exhilarating and hard work. Being an active member and AIS contributor of FleetMon I saw the trip an opportunity to showcase the Fleetmon Satellite Tracking System.

The heart of the system is a small grey, highly waterproof box. On arrival in Barcelona it was simply a case of placing it anywhere on the vessel. I chose to place it on top of the instrument housing directly below a hatch and merely secured it with double sided tape.
It was a dream to use the tracking system – once switched on and deposited on the vessel, it required no further intervention and even reported back the state of charge of its replaceable batteries. A brief word about the Marathon: Although based on the hull mould for a
44ft Feeling, Marathon was custom built in 1990 for the original owner to take part in a single handed round the world race and is of a double thickness fibreglass construction, in this guise it had no engine but was fitted with a generator where the engine now resides; all the sail handling gear on this cutter rigged yacht is set up for easy use with no less than 10 winches (5 either side) within the cockpit and a further 3 on the mast. With roller furling gear on the jib and foresail and up to four reefs possible in the mainsail it is easy to trim the yacht to suit the weather conditions without having to change sails – a system that came into its own in the severe storm we encountered  outside La Coruña. Due to  the unfavourable wind and weather conditions forecast we had to interrupt our delivery there and temporarily returned home.

My personal high point was climbing the mast to free off some trapped rigging on day 2, one of the trip’s high points were dolphins shadowing the boat off Portugal. A near miss with a large commercial that turned towards us was may be one of the most scary moments.

The trip has been made so much more pleasurable by my fellow crew members but I must highlight our skipper, Dick Smith, senior lecturer and vice principal of the Navigation School at the Royal Temple Yacht Club and highly experienced sailor without whose help and guidance the trip could have been quite daunting! The Fleetmon Satellite Tracking service enabled family, friends and the registered owner to keep a track of our movements throughout the trip. Some crew members on phoning their family during a stopover to tell them where they were received the reply `I know, you have already been there a day, I am watching you on Fleetmon!´.
The trip has opened my eyes to the possibilities of a satellite tracking for not only large companies but also individuals, wishing to monitor their valuable but movable asset, fleet owners – both commercial and pleasure, offshore race organisers, delivery crews, etc.
The detailed data including speed profiles and weather and sea state information and forecast, available both in real time and as an historical downloadable file may be used for live position monitoring, post trip analysis, route planning and performance analysis.”

We are happy you enjoyed your adventure and say thanks for sharing your experiences with us, Rob!

Fleetmon is heading towards 140’000 fascinating ship photos – A reason to say “thank you” and a perfect occasion for an interactive game!

Leave a comment below, and bet, by when FleetMon.com will reach the mark of 140’000 photos. The user providing the closest bet will get one of our cool FleetMon T-Shirts!

You can start right now, posting the date and time (UTC) you bet on – the entry deadline for bets is Monday night, the 16th of July at 12 pm UTC. Many new dedicated AIS partners and avid AIS sharers have helped us to further increase the FleetMon AIS coverage over the last 2 weeks.

Thanks to everybody involved and committed to make Fleetmon the best and most complete AIS network and tracking community worldwide! The creative members of the FleetMon team spent some time in designing shirts and the results are just amazingly cool!

After the whole team declared the shirts the new favorite outfit, we have made them now available for you as well:

To get one of the shirts with the green FleetMon logo printed on the front and back, just visit our shop and choose your preferred color and size. The shirt with the proud little FleetMon sailor printed in vintage optic on the front is available here!

If you have questions, comments or suggestions please get in touch with us. We look forward to see our shirts worn all over the world! So come get your personal FleetMon shirt now, because:

Finally, Fleetmon says “¡Bienvenido y Bem-vindo!” to the spanish and portuguese speaking world! We know there are a lot of you speaking these wonderful languages and we hope you enjoy the new translations as much as we do. You have feedback, suggestions or found a failure? Please let us know, we are always happy to improve!

We would like to thank all users and supporters who helped us translating over the last weeks – you made a great job and deserve the credit! Next milestones are French, Dutch and the Scandinavian languages.

You want to help us translating FleetMon into your language? Just get in touch with us!

What a special story of Hamburgs famous shipspotter Thomas Kunadt.
Over the last 15 Years he collected images and data for more then 300.000 vessels.
His passion for vessels brought him to over hundreds of ports worldwide.

It is fascinating to hear about his great engagement and love for a topic we follow deeply here. FleetMon’s fellow member Rob is currently on a 2.000 mile sailing trip, helping transfer the 45 foot yacht Marathon from Barcelona in Spain to Falmouth in England.

Sailing is about the best thing you could do during these sunny days of May, and the FleetMon team here is a little jealous, to be honest ;-)

Rob took one of our FleetMon Satellite Tracking transponders on board so we can follow their trip closely right here on FleetMon.com. Having started in Barcelona on April 20th, they passed Gibraltar Strait on May 3rd and then sailed up the Portuguese and Spanish west coast, with stopovers in Quarteira, Cascais and Bayona (near Vigo). Entering the Bay of Biscay they faced strong winds up to force ten and had to change course to head into A Coruña in Galicia, Spain. 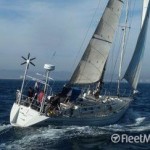 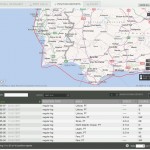 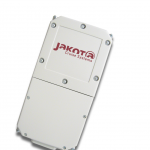 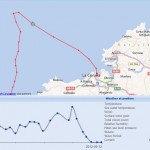 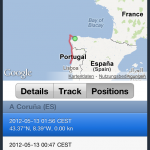 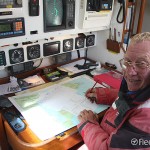 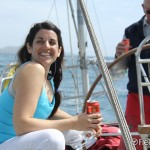 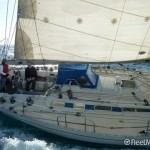 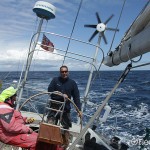 Every hour during their past trip, the small FleetMon Satellite transponder reports their position to FleetMon, so the crew’s friends and family can take part in the adventure and are always kept up to date about the ship’s whereabouts, either here on FleetMon.com or with the free FleetMon Satellite Tracking app for Android and iOS phones.

Because the transponders send via their own satellite communication, the Marathon’s position is guaranteed to come in even when on high seas, and it does not matter whether they are close enough to an AIS receiver station. Well, the Marathon does not even have an AIS sender, so the FleetMon Satellite tracker was the most convenient (and cheapest) tracking solution anyway! It is just the size of a cigar box and is battery powered, hence does not need any cabling. In fact, it does not even need to be installed: Rob told us he just put it somewhere under deck and switched it on.

The last leg of the trip will lead them across the English Channel to Falmouth. Due to bad weather the Marathon crew don’t know when they can set sails again yet, but we’ll keep you posted!

Dear Crew, we wish you a save trip over to Falmouth, and may there always be enough water beneath your keel! Thanks for sharing your trip with us!

You can reach Rob by e-mail at rob(at)digital-seas.com. For questions on FleetMon Satellite Tracking and tracking your ship with FleetMon, feel free to contact support(at)fleetmon.com.

Please note: Rob send in some photos from the trip that normally cannot be published on FleetMon.com. These photos will be removed after the trip.

More about the MARATHON on FleetMon.com

Welcome to new ports and areas with live ship traffic on Fleetmon.com, Fleetmon Explorer and Fleetmon mobile! Here is the April 2012 roundup … thanks to everybody involved for the kind cooperation!

Welcome to new ports and areas with live ship traffic on Fleetmon.com, Fleetmon Explorer and Fleetmon mobile! Quite a nice list this month … thanks to everybody involved for the kind cooperation!

…and last but certainly not least: The Panama Canal is back on FleetMon, with excellent coverage of Panama City, Balboa and the Miraflores locks: