With the global pandemic and another global recession looming on the horizon, luxury is the first thing to go. The luxury cruise industry is struggling. The situation is the worst that tourism has faced since the 9/11 attacks. The idea of being confined to a tiny room in a ship infested with coronavirus is an especially unappealing image. The demands for cruise liners have sharply plummeted, many workers have been laid off and divisions shut down. Quite obviously the ships are sold as is evident from the case of Pullmantur Cruises which operated from Spain and had a substantial fleet of cruise ships. After around 150 crew members of one of the ships, the MS Horizon, tested positive for the coronavirus, the company was forced to halt operations. Its ships, the MS Sovereign and MS Monarch were stripped of valuables and sold for scrap. But what happened to the glamorous ship after it outlived its usefulness?

END_OF_DOCUMENT_TOKEN_TO_BE_REPLACED

Maersk Drilling eyes for investment in new carbon-negative energy. After it’s successful deployment in the Aerospace Industry, the shipping and offshore sector will soon see the deployment of carbon-neutral energy.

END_OF_DOCUMENT_TOKEN_TO_BE_REPLACED

In recent years, international shipping has increasingly been subjected to criticism for its environmental record. It was in this context that the regulation issued by the International Maritime Organisation (IMO) prohibiting vessels from burning fuel with more than 0.5% sulphur content from 1 January 2020 onwards met with a generally favourable reception. As most ocean-going vessels had previously been burning fuel oil with a sulphur content of 3.5%, it was generally assumed that the very low sulphur fuel oil (VLSFO) would have a positive environmental impact, especially when ships are in port. So how about an initial fact check?

END_OF_DOCUMENT_TOKEN_TO_BE_REPLACED

As transport-related information is increasingly digitalised and standardised, ports have the chance to take on a key role as digital hubs. As reported in our blog entry on April 19, the process of digitising trade documents is finally moving forward as key players launch blockchain-based initiatives. Now experts predict that before long, digitised information flows within the shipping sector will be integrated into other parts of the overall logistics chain. The experts in question are heading Port CDM (Port Collaborative Decision Making), a concept being developed under the auspices of the EU-funded Sea Traffic Management Validation project. A recent announcement from this project team indicated that a common messaging standard for port activity time stamps is being finalised with the help of the International Association of Marine Aids to Navigation and Lighthouse Authorities (IALA). Moreover, several ports are already testing Port CDM. 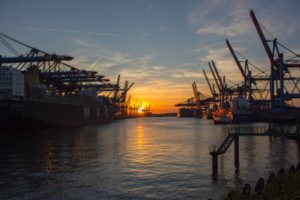